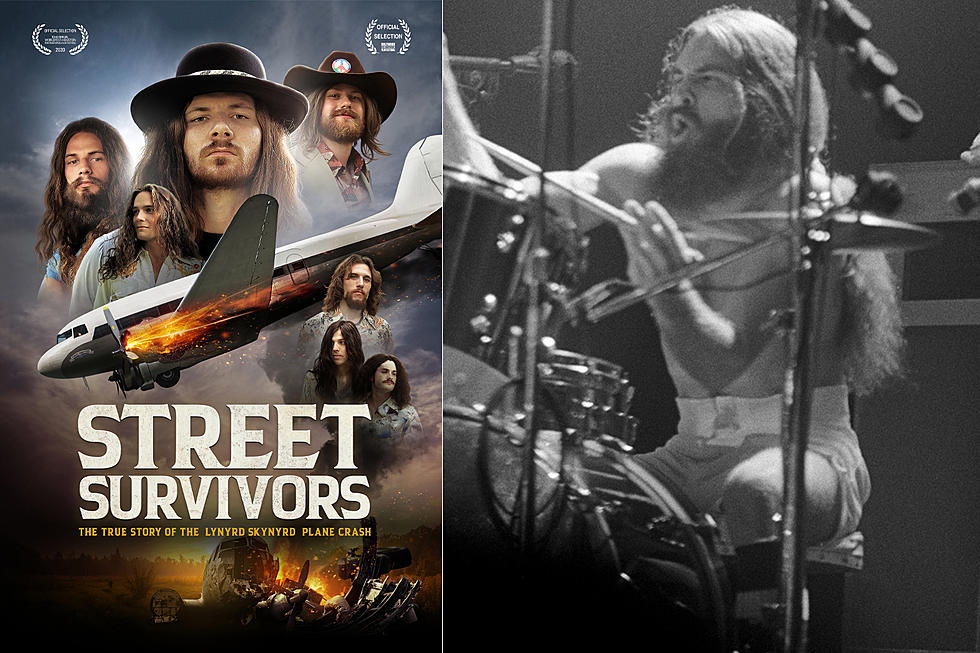 Now, one of the band’s Hall of Fame drummers, Artimus Pyle, describes surviving that crash in the film “Street Survivors: The True Story of the Lynyrd Skynyrd Plane Crash.”

“I just thought it was time for the Skynyrd fans to know what happened to us on that fateful day,” Pyle told WTOP. “It was time to tell that story. … I think about this every single day. It’s not something that I can put out of my mind. It’s always there. … For many years I was sad, but I just decided that after 40 years … I’m going to be happy about the music.”

The tragedy unfolded after the band had just performed in Greenville, South Carolina.

“The last time [frontman] Ronnie Van Zant ever played ‘Free Bird’ was in Greenville,” Pyle said. “Then we were heading to Baton Rouge, Louisiana on a 95-city world tour. We were going to do a United States leg of the tour using our airplane that we had our name on, then we were going to go to Australia, Japan, Europe. … We were only five cities into it.”

That’s when disaster struck during their flight to Baton Rouge.

“We ran out of gas,” Pyle said. “The pilots made a fatal mistake … not checking the tank. It was a 1947 Convair, so you can’t trust the gauges. … We were only 60 miles away from Louisiana. … We almost made it, but we ran out of fuel at 9,000 feet. … We took on 400 gallons of fuel [but] the engine was not running properly, using more fuel than necessary.”

What was he thinking as the plane was about to crash?

“My life didn’t flash before my eyes, all I was doing was trying to assess,” Pyle said. “My Marine Corps training kicked in. … I kept going back and forth to the cockpit to relay information to the cabin. I played stewardess and told everybody to put out their cigarettes, turn off any lights and conserve any energy, told everybody to fasten their seatbelts.”

He says there was mostly an eerie calm.

“We all knew what was happening,” Pyle said. “There were a couple of incidents where a band member got really mad at the pilot and co-pilot for letting this happen, so there was a little bit of yelling going on, but everybody pretty much remained calm. We realized that we just needed to hang on because it was going to be rough — and it was.”

After impact, Pyle crawled out of the wreckage with broken ribs to get help from a local farmhouse in rural Mississippi.

“I was fully aware of every single second,” Pyle said. “I’ve never called myself a hero, but Gary Rossington did for years. … I did help a couple of people out of the plane … a little bit of triage. … When I walked out of that swamp and forest … I went to the farmhouse and came back. I was upset, I was scared, my friends were dead before my eyes.”

“I think about the people that perished every single day,” Pyle said. “Our pilot and co-pilot, I found them before I left the crash site, and they were both definitely dead. Then, of course, the four members of our organization: Dean Kilpatrick, who was an amazing guy, and Cassie Gaines, she sat in front of me. She perished and I’m still here.”

“When you lose somebody like Ronnie Van Zant, who was the lead singer, visionary and prolific writer for the group … he and Steve would have written many more songs,” Pyle said. “That’s where the sadness might come, thinking about the potential music that would have come out. … Ronnie left a pretty large legacy in spite of his short time on earth.”

Formed in Jacksonville, Florida in 1964, the band named itself after a gym teacher.

“His name was Leonard Skinner,” Pyle said. “The guys changed the name and the pronunciation. … They used that name kind of as a joke to get back at him for kicking them out of school for long hair, then everybody ended up friends with Coach Skinner.”

“The storyline of ‘Gimme Three Steps,’ that really happened at a little bar,” Pyle said. “I was still in the Marines, so that was Bob Burns [on drums]. … [Producer] Al Kooper got him a great drum sound, a nice, warm and fuzzy drum. …He did an amazing job.”

“Did you see the film on Jimmy Carter called ‘Rock & Roll President?’” Pyle said. “They [show] Bob Dylan sitting in this room, playing ‘Simple Man’ in the background. Bob says, ‘It’s just like that song by Lynyrd Skynyrd. … Listen to the words. That says it all.’ When I heard America’s poet laureate quoting Ronnie Van Zant … I literally got goosebumps.”

Still, the album’s biggest hit “Free Bird,” a nine-minute epic for the ages.

“It is a wild, chaotic melee of a song,” Pyle said. “The crash definitely added to the stigma, but when I think of ‘Free Bird,’ I think of an angel. You’re released from the bonds of earth. You’re like an angel. The words, ‘If I leave here tomorrow, would you still remember me?’ That’s how we remember all of our loved ones. We keep them alive by talking about them.”

Their second album “Second Helping” (1974) featured “The Ballad of Curtis Lowe,” “Call Me the Breeze” and arguably their most famous song, “Sweet Home Alabama,” which feuded with Neil Young by saying, “A southern man don’t need him around, anyhow.”

“He wore Neil Young t-shirts, so Ronnie didn’t hate Neil Young by any stretch of the imagination,” Pyle said. “He respected and honored Neil, but he was saying, in my opinion, ‘Don’t judge all southern men by the ones who are racists.’ … If a person is a good person, it doesn’t matter what gender, the color of their skin or what their sexual preference is.”

“The one song I felt I wrote with Ronnie is ‘That Smell,’” Pyle said. “We were talking about the music and I came up with the drum beat from The Eagles’ ‘One of These Nights.’ … It’s called a lilting groove. I asked Ronnie, ‘You’re familiar with ‘One of These Nights?’ What about that as the groove behind ‘That Smell?’ And I remember he said, ‘I like it.’”

“The whole band was tickled to death to have both real drummers of Lynyrd Skynyrd inducted into the Rock & Roll Hall of Fame at the same time,” Pyle said. “Bob and I were very close, we talked almost every day and my band went over and sang ‘Tuesday’s Gone’ at Bob’s funeral [in 2016]. They sang it acoustically and did a beautiful job.”

Today, Pyle plays with his own band, the Artimus Pyle Band.

“I still play that music with my band all over the country,” Pyle said. “My band plays Lynyrd Skynyrd better than any band in the world. … People are so happy to hear the music played properly with respect, honor and accuracy. I hear the stories of where they were when we crashed, what the music means to them. I just celebrate the power of the music.”

Pyle’s band is different from the band that now tours as Lynyrd Skynyrd, fronted by Ronnie’s brother Johnny Van Zant. As of 2019, Rossington was the last original member remaining, but he too was sidelined after emergency heart surgery in 2020.

“There is nobody in that band from Lynyrd Skynyrd that was inducted in the Rock & Roll Hall of Fame — that’s what I go by,” Pyle said. “I was the drummer of the real Lynyrd Skynyrd.”

Van Zant’s widow, Judy, legally tried to stop the film from being made, but a court of appeals sided with Pyle and Cleopatra Films.

“I gave my story to Hollywood; I did not sell it,” Pyle said. “It’s a $1 million story and I gave it to Hollywood. I didn’t do this for profit. They sell the movie in Walmart, it’s on Netflix and different formats, and I don’t receive a single dime for the movie and my participation in it. I did that for a reason — I wanted the story told and I didn’t want it to be about money.”

With every drum beat, he thinks fondly of his lost buddies.

“Sometimes I’ll find myself getting extremely emotional when I’m playing and tears will flow, but I keep on slamming,” Pyle said.